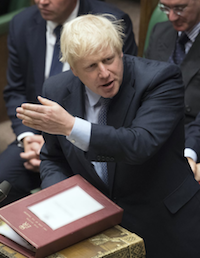 During Prime Ministers questions today, Rob Butler, Conservative MP for Aylesbury compared Russian threats to Ukraine with Chinese threats to Taiwan, noted the recent uptick in Chinese flights into Taiwan’s ADIZ and asked him to confirm that the UK will stand up for freedom and democracy, security and stability across the globe.

The Prime Minister replied, condemning the incursions as “not conducive to peace and security in the region.” He added that there needs to be “a peaceful and constructive dialogue by people on both sides of the Taiwan Straits.”

It is reassuring to see the Prime Minister condemn the incursions into Taiwan’s airspace. But the Taiwan Policy Centre would like to see the UK Government offering more concrete support for the freedoms and democracy of Taiwan, as it has commendably in Ukraine.

While there clearly needs to be dialogue between Communist China and Taiwan to de-escalate tensions across the Taiwan Straits, this dialogue cannot extend to cover the future of Taiwan. That is a decision for the Taiwanese people alone to make

The Chinese Communist Party has no right to have any input into the future of Taiwan or to dictate terms to Taiwan, just as Russia has no right of say over the future of Ukraine. Both Taiwan and the Ukraine are soverign countries and have the right to determine their own future.