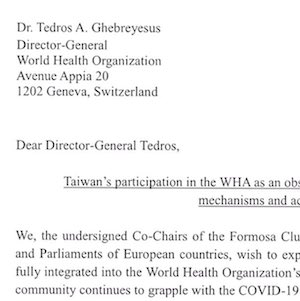 116 Parliamentarians Call For Taiwan's Participation In The WHA

More than one hundred British Parliamentarians have signed an open letter to the Director-General of the World Health Organisation, urging him to allow Taiwan to participate in the upcoming World Health Assembly.

In total, 116 members of both the House of Commons and House of Lords signed the letter, including the co-Chairs of the British-Taiwanese All-Party Parliamentary Group, Bob Stewart MP and Lord Rogan.

The signatories came from all political parties and all sides of the political divide illustrating the cross-party strength of feeling there is already that Taiwan should be allowed a meaningful role in international organisations like the World Health Organisation.

There were no government signatories to the letter owing to a long-standing convention that Ministers don’t sign open letters.

However, Foreign Secretary Dominic Raab did host a meeting of the G7 Foreign Ministers at the start of the month. The official communique from that meeting saw the G7 say, “we support Taiwan’s meaningful participation in World Health Organisation forums and the World Health Assembly. The international community should be able to benefit from the experience of all partners, including Taiwan’s successful contribution to the tackling of the COVID-19.

You can read the G7 Foreign Ministers Communique here. 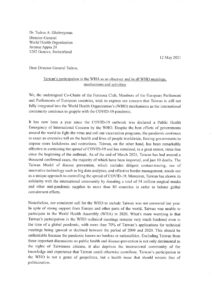 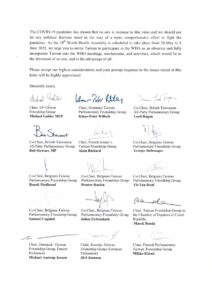